The Roundhouse as it is known is the brainchild of a couple from Newport, Wales who were keen on living the green way. The home closely resembles the picturesque hobbit house of Bilbo Baggins. Distinctive house features include a Douglas fir frame, a straw roof, round design and layout (no way for man and van people to get lost inside for sure), also a cute chimney protracting through the straw roof. 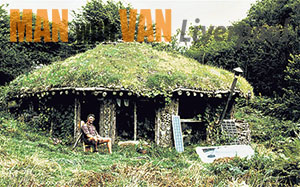 The low impact home’s interior features wooden floors laid with rugs. Wooden furniture throughout the place is covered with sheepskins for both warmth and charm. The house has two platforms, storeys is perhaps not the right term. The bottom platform is where everyday living takes place – there is a kitchen area, a dining area, a lounge area etc. The top platform serves as the sleeping quarters. Overall, the house is very well thought out, and will definitely appeal to those who have the wildwood spirit in them.

The designer and engineer of the house is one of the pioneers in organic/green living, and has been in the business of designing and creating low impact homes for years now. As expected the owner tries to make a living off the land as much as possible though he also teaches courses on green/low impact living. He has written a number of books on the subject.

Along with all the ecofriendly features (most of them made of recycled materials, including the windows) the house also has its own composting toilet, and is solar powered throughout. Obtaining the planning permission for the Bilbo green house never happened as the structure did not cover most of the safety and building regulations applicable to the area. Nevertheless, owners went on with the construction and were looking to receive retrospective planning permission once finished. However the council did not buy that either and after a ten year court battle, an order was issued to demolish the house. Local residents who backed the owners all along in their attempt to keep the place mustered enough leverage to postpone the demolition indefinitely so the ecofriendly hobbit house is safe from the wreckers’ ball for now.

After two thousand six, the view and attitude toward such green homes has changed, still though not many local councils are willing to issue planning permission for these structures. Having said this, there are more and more of these properties appearing in a number of communities throughout the UK. Green homes of this kind are very cheap to construct, but do swallow up a ton of man hours as there is quite a bit of labour surrounding the build. The Bilbo eco house took fifteen hundred man hours to finish, though it only costed three thousand or so pounds. This is less than the cost of some long distance man and van property removal services!

Some say that this alternative thinking and approach toward living may help solve the nation’s bulging housing shortage. However, living in a hobbit-like house is not everyone’s cup of tea and unfortunately there’s a long way to go before green becomes the new cool.