Six of Europe’s most fascinating lighthouses

For centuries lighthouses have protects sailors and their ships and provided them a safe passage through shallow waters. Here are several of Europe’s most beautiful and interesting lighthouses. 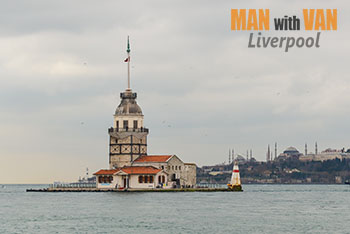 Maiden’s Tower – Also known as Leander’s Tower this astonishing lighthouse sits on a tiny islet at the southern entrance of the Bosphorus Channel. It was built during the 12th century and is currently one of Istanbul’s most recognisable landmarks. The lighthouse has an octagonal shape and is topped with a cupola. It is approximately 23 metres tall.
Rubjerg Knude Lighthouse – Located on the coast of the North Sea, Rubjerg Knude is arguably Denmark’s most distinguishable lighthouse. It was established during the late years of the 19th century and lit for the first time on December 27th, 1900. Sadly, it was closed in 1968 and converted into a touristic attraction due to the area’s bad weather conditions. In 2002, it was completely abandoned and experts expect that it will fall into the sea in the early years of 2020. So, make sure that you visit it before it is gone forever.
Lighthouse of Genoa – Officially known as Faro di Genova, this structure is the main lighthouse of the Italian port city of Genoa. It was built during the 12th century and automated during the first half of the 20th century. It sits on the hill of San Benigno and is one of the oldest still functioning lighthouses on the planet. It has a main range of 46 kilometres and a reserve range of 33 kilometres. The building is 76 metres tall and is regarded as the second tallest masonry lighthouse in the world. Today it is one of Genoa’s most symbolic edifices and tends to attract both local and foreign visitors.
The Low Lighthouse – This structure is one of the three lighthouses that are part of the Burnham-on-Sea complex in Somerset. It is currently the only functioning lighthouse of the three and was built in 1832. It is made entirely out of wood and has a focal height of 7 metres, and a range of 22 kilometres. The lighthouse is listed as a Grade II building and is a must visited site in Somerset. So, as soon as your relocation via man and van services is over, go and see this amazing edifice with your own eyes. By using man and van services you will drastically speed up the execution of your move.
Roter Sand – This lighthouse entered into service in 1885 and is situated in the Weser estuary which connects Weser River and the North Sea. The construction of the structure commenced in 1880 and ended in the same year when it was lit for the first time. The Roter Sand is 28 metres tall and is one of Germany’s most important lighthouses. In 2010, it was classified as a Historic Monument of Engineering by the German authorities.
Gorliz Lighthouse – Built in 1990, the Gorliz Lighthouse is located in northern Spain in the Basque regions of the country. The structure guides maritime vessels through the Bay of Biscay and is one of Spain’s most beautiful lighthouses.