Sefton Park is a public park that is located in the southern parts of Liverpool. The park lies in an eponymous district and is the only Grade I open space in the city. The park was created in 1872 and currently covers an area of 235 acres. The park is open all year round and is part of the Register of Historic Parks and Gardens. 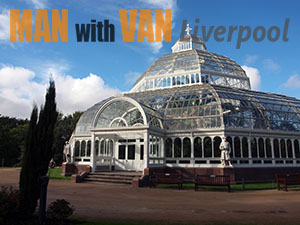 The site on which the park is located was once part of the 2.300 acres Royal Deer Park of Toxteth. After the disparkment of the Royal Deer Park in 1591, the land on which Sefton Park stands become the property of the Earl of Sefton, after whom the park is named. Some of the lands from the original Royal Deer Park were transformed into the narrow streets and courts with tiny houses as Toxteth grew. From the original 2.300 acres only 375 acres were saved when the Borough Council purchased it in 1867 from the Earl of Sefton.

Soon after the land was purchased, a European competition was launched for the design of a grand park. A total of 29 entries were received and at the end the competition was won by the French landscape architect Edouard Andre. Andre collaborated on the park’s design with Liverpool architect Lewis Hornblower. The park’s design is based on oval, circular and marginal footpaths which are framing the green spaces. The two natural watercourses of the park were designed to flow into a seven acre man-made lake. The park was officially opened to the public five years after the purchase of the land by Prince Arthur.

In 1890 the outer perimeter of the park was the site where numerous Victorian and Edwardian houses were built. Also a century later in 1983, Sefton Park was the subject of a major improvement programme. The programme aimed to enhance the park’s quality as the park was going to be part of the 1984 Liverpool International Garden Festival. In recent years the park was awarded the most prestigious awards for high standard open spaces, the Green Flag.

As aforementioned the park is located in the eponymous district of Sefton Park. The district is one of Liverpool’s finest commercial areas. The area is home to numerous local businesses such as public houses, stores and man and van companies. The presence of many moving companies makes relocating from and to the area an easy task. Even more, most companies provide their man and van services at highly affordable prices which literally everybody can afford.

The presence of the park and the numerous companies makes Sefton Park also a highly desirable residential area. Some even claim that the district is the finest residential area in the city.