There are plenty of reasons for you to move abroad. Life has funny ways to make us undertake such adventures. Some do it in pursuit of a career, others like to see new places and experience new cultures, There are even those who in a move taken from a Hollywood movie follow their love to another country. The reasons differ but the problems that come with such a decision are more or less the same. 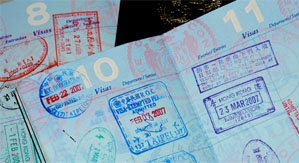 Moving home is a big step on ones life in general. Moving to another country is a quantum leap. And while you might get away with planning a move to a new home with a few weeks of planning or preparation (although more is better) you need months to plan relocating abroad. Some people go as far as planning an year ahead. And often carried away in preparing for leaving the old place people forget to prepare for settling in the new one.
Finding a home in the new country is just the first step. Those that move for work may be lucky and have their company provide them with accommodation. Otherwise you’ll have to do it yourself. Luckily in the 21st century all you have to do is some googling. Find a good real estate agency, read a bit about the city you move in and then have the agency find you something nice. A better idea is for you to contact them in advance and then once you arrive spend a couple of weeks in a hotel and check out the apartments/houses they’re offering you.
Something you absolutely have to do is start learning the local language. Unless you moved to a place like the US or Australia where English is the native language you’ve no other option. Learning the language is essential for you to find friends and have a meaningful social life. Even if there is a big English speaking community in the city you settle in or a lot of the people speak English (in countries like the Netherlands or Sweden the majority of all people speak English fluently) you still should put effort in learning at least some of the native language. It’s a sign of respect and appreciation to local people. In the end you are a guest in their country – you’re the one that is expected to speak their language and not vice versa.
Also try to learn some of local manners and customs. You’d be surprised how big the cultural borders can be. You never know when something as insignificant as a common gesture can have an absolutely different meaning. In Iraq the gesture for stop means “Move along”. In Korea it is considered extremely rude and impolite to blow your nose in public. And in Bulgaria people nod for “No” and shake for “Yes”. Just cross the Canal and go to Normandy, France and you’ll be amazed how different the people there are.
So be careful and put a lot of thought in your decision. Calling a man and van in Liverpool to have your belongings removed is the easy part. Getting accustomed to your new home is a different story.