St. George’s Hall is perhaps Liverpool’s most prominent and well-known landmark. The hall is located on Lime Street in the central area of the city. St. George’s Hall is built in the neoclassical architectural style and is home to both concert halls and law courts. The hall dates back to the mid 19th century and is recognized by the English Heritage as a Grade I building. 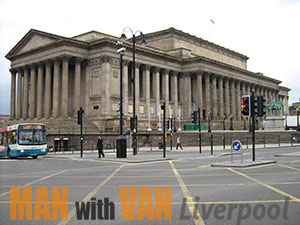 The hall is flanked by St. George’s Plateau and St. John’s Gardens from the west and east respectively. The hall is also faced by the Lime Street Railway Station which is one of the busiest, if not the busiest tube station in Liverpool. St. George’s Hall is also part of the William Brown Street Conservation Area.

The site on which the hall stands was once the site of the first Liverpool Infirmary. The infirmary was located on the site from the mid 18th century to 1824. The idea of building a venue hall in Liverpool came up in 1836 when the city governors realized that Liverpool was hosting more and more music festivals but lacked a suitable hall to accommodate the festivals properly. In 1839 it was the prominent London architect Harvey Lonsdale Elmes who won the competition for the hall’s design. At first the idea was to build two separate buildings, one to serve the purpose of a concert venue and one to serve the purpose of a law court. However in 1840, Harvey Lonsdale Elmes decided to amalgamate the buildings and built one single building that will serve both purposes and more importantly that will be one of the largest edifices in the country.

The construction of St. George’s Hall began in 1841 and ended in 1854 when the hall was opened to the public. Sadly the hall’s designer, Harvey Lonsdale Elmes dies in 1847 and his work was continued by John Weightman and noted structural engineer Robert Rawlinson. In 1951, Sir Charles Cockerell was appointed as architect of George’s Hall and it was he who designed most of the interior decorations of the hall. During the early years of the 21st century, the hall was the subject of a major reconstruction project. St. George’s Hall was officially reopened by HRH Prince of Wales in 2007.

Lime Street, the street on which the hall is situated is one of London’s most famous streets. The street just like the hall is part of the William Brown Street Conservation Area and therefore is one of Liverpool’s most affluent and opulent streets. Aside of the being the location of St. George’s Hall, Lime Street is also the location of several more well known local landmarks.

The area in which St. George’s Hall lies is also home to several public service businesses such as man and van services. In fact people who are moving to or from Liverpool can easily find high quality removal services as the city is home to some of England’s finest man and van companies. The best thing about moving services is that nowadays most companies are working with high affordable moving fees.

Also some of the city’s most expensive and well-known residential houses are located in close proximity to Lime Street and St. George’s Hall.