The International Garden Festival Site has been derelict for many years now, and Liverpool City Council has bought the site in order to redevelop it for the greater good of the community. Parts of the Aigburth site will be used for new housing (twenty eight acres), while the remaining sixty acres will be turned into a public area for everyone to enjoy. Current site owners – Langtree are in the final stages of the sale to the council. 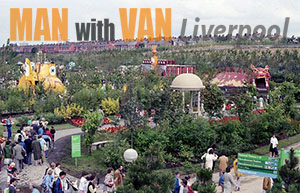 Liverpool Mayor Joe Anderson’s vision of the site is to turn the empty space into a community area where there will be cultural and artistic events. If the mayor follows through on his project, this would put an end to nearly thirty years of uncertainty over the site’s fate since the International Garden Festival which once attracted nearly four million visitors is no more. The Festival has not been stages since the Toxeth riots.

Although successful initially, the site was closed down in nineteen eighty five. Some of the land was redeveloped for housing, with the remainder of the former showgrounds were turned into gardens. This however proved futile, and about a decade later the entire place was abandoned, despite the many regeneration attempts throughout that period.

Another ten years later in two thousand seven, a planning application was submitted for approval. The project included the construction of thirteen hundred apartments and nearly seventy townhouses. It also included full restoration of the Chinese and Japanese gardens, as well as the lake. There were plans to construct many new woodland walks throughout the former showgrounds. The planning application was approved by city authorities, but the credit crunch and the financial crisis which was tightening its grip on the private developers eventually drove them out of business and into bankruptcy thus leaving the project incomplete.

The original owners Langtree, tried to re-establish the site through making it available to public use in twenty twelve. However, local community leaders deemed it ‘tatty’ as some of the park’s key features were rundown and in bad condition.

Liverpool Mayor has pointed out that those few years of economic downturn took their toll on many of the partners looking to develop the former showgrounds but now the new plan is a positive turn for the site itself and the city in general. If everything goes according to plan and schedule, the former festival site will be good news for local residents and city visitors alike. It is expected for the purchase to be finalised during the first couple of weeks in April.

If you require small scale property removals or quick and inexpensive van delivery services in the Liverpool area, then perhaps you will find a specialised man and van removal service to be of genuine help. Liverpool based man and van removal companies know their stuff and will be able to cover all stages of your small scale removal or van delivery requirements with professional efficiency and precision. City based service providers are punctual, reliable and maintain good short notice availability.