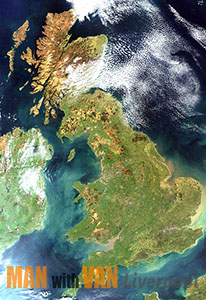 British people have spent seven and a half billion pounds in moving house in the period 2014 -2015. This however doesn’t mean that man and van removal companies have pocketed much of the profit, as actual relocation costs are much less than what people pay for things like stamp duty, surveyors and other applicable fees. In the case of London, moving to a newly purchased home will cost about twenty three thousand pounds, which is higher than the average national salary.

In twenty fourteen/twenty fifteen period, the average cost associated with moving house in UK was about eight thousand seven hundred pounds total. In comparison to twenty twelve/twenty thirteen, there is a five hundred pound increase in relocation costs. Roughly a decade ago, in two thousand four, moving house would have set people back about seven and a half thousand. The increase in house moving costs isn’t to do with the actual man and van removal service prices, but the hike in things like conveyancing, stamp duty costs, real estate agent fees etc. These additional services whose fees have grown notably are driven by the growing prices of property in the UK as a whole, especially in the south of England.

The estimated cost of moving house in twenty fourteen/twenty fifteen was eight thousand seven hundred pounds, which breaks down to:

The overall cost of home relocation depends on where people are moving from and to. In London, the total average price tag of a home removal is just over twenty three thousand pounds, which dwarfs the national average moving cost of eight thousand seven hundred pounds. It should be noted that although certain regions are really cheap to move to such as Northern Ireland, they have seen some of the highest percentage of moving admin fees – up to 20%. London on the other hand has seen only about 11% increase of admin removal costs. This basically affirms that the capital remains a very expensive place to live despite the smaller rise in moving costs.

House prices in UK have risen sharply in the last number of years, especially in the south. The high property prices when compared to the slow and small growth in wages means many people are simply priced out of the property market both rental and ownership. At the moment, the costs of moving house anywhere in the UK are the highest since two thousand seven. The average home mover spends twenty six percent of their earnings on house removals. London remains the most expensive place to buy a house in terms of both outright costs and additional expenses. The city also has much higher stamp duty on more expensive homes. Property prices are expected to continue to rise, or at least remain at current levels, but upcoming Brexit vote could potentially upset the system.