Fancy a stylish party at one of the city’s most exquisite entertainment venues? If so, then you better fork out those one thousand seven hundred pounds, because that’s how much it costs to kickback in Liverpool’s hip and flamboyant party accommodation. 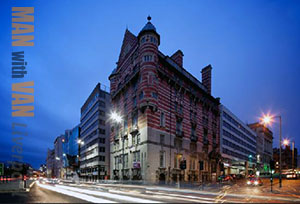 The establishment, situated on 30 James St, is actually a basement, not just any basement though, but one able to accommodate up to twenty party makers in lavish surroundings and unique atmosphere. Next week, the venue’s steel doors are scheduled to open for the first time, the sum of seventeen hundred pounds is what will get you in and make your night one to remember. The basement in question used to be part of the White Star Line and Titanic Apartment Hotel (occupying the same address above the basement).

It will never be known whether or not the founder of the Titanic Apartment Hotel (a US millionaire who lived in the early twentieth century) would approve of the remodelling project, but others do however and the place has actually got its first booking, made well before the opening date.

The vault (as it is known) features a total of ten luxury ‘beds’ or recreation pieces of furniture where guests can catch a breather from all the fun and excitement, or when the bubbly gets too much. The beds are finished with fun-fur bedspreads, with three of them part of a small gallery section of the vault, which is only reachable by ladder (ladder is in place, not need to bring your own).

Furthermore, the vault also has a proper spa section with two Jacuzzis available to use by guests. The secret staircase leading to the spa section below the party pad is protected by a steel door which is rather concealed and somewhat invisible in the bloom of lavish interior decoration thus making things even more fun for guests of the vault.

The property housing this astonishing underground venue is a beautiful Grade II listed building dating back to eighteen ninety eight. The place is quite elaborate in structure and design – a true man and van removal nightmare, but hopefully nothing is going anywhere anytime soon. The building was constructed on order of John Pierpont Morgan and the Ismail Family – founders of the White Line Star company, responsible for the construction of Titanic, Olympic and Britannic transoceanic liners.

One of the key features of the vault is its ceiling, decorated with an elaborate classical mural of Adam and Eve (in their birthday suits of course) in discussion with a serpent. The mural is of substantial proportions thus being one of the highlights of the entire interior design. The hotel itself is a splendid three hundred bed establishment (the man and van company people would have been quite busy with three hundred sets of hotel room furniture). Despite of the three hundred bed capacity, the opening gala night of the venue will only see a hundred and fifty distinguished guests.

Management says the vault venue will be good for Liverpool’s tourism scene as it will attract more visitors and even the odds when competing with other cities when it comes to sights and places of interest.