The historical heart of Liverpool, its cultural, economic and commercial centre is of course the area that is defined as the Liverpool City Centre. It is a very interesting place indeed, one that is soaked in the spirit of the past centuries while the modern developments and attitudes are not overlooked even one bit. In many respects, those two otherwise opposing aspects co-exist in harmony here. The Liverpool City Centre is, in the opinion of many, the perfect example of a modern city, which is why it is worth it getting into some detail about its features and geography.

What makes the Liverpool City Centre different from the city centres of other big cities in Britain is the fact that there is no ring road that actually separates the heart from the rest of the metropolitan area. In contrast, the borders of the Liverpool City centre are defined by the borders of the districts of  Vauxhall, Everton, Edge Hill, Kensington, and Toxteth. In the same vein, the postal districts that define the immediate centre of Liverpool are L1, L2 and L3. An interesting  fact is that in recent years the amount of people moving in to live in the Liverpool City Centre are rising significantly, and today their number reaches 36 000. 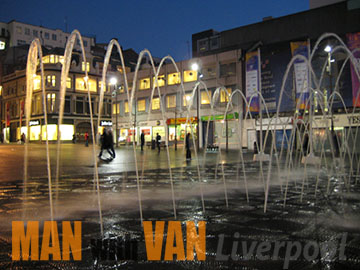 Liverpool received its first official status in 1207 and traces of the original settlements that the city consisted of are still to be seen in certain places in the City Centre. It is more than logical that the most interesting and popular tourist attractions in Merseyside are to found namely here, and the stats that are currently available show that this is exactly the case. According to the data, last year alone 650 000 people visited the Liverpool City Centre. The most famous site here is definitely the UNESCO World Heritage area that goes by the name of Liverpool Maritime City, which occupies the territories of the former imperial docks in the area.

The Liverpool City Centre is divided into several key portions that make up for the different functions that the centre serves in the life and future of Liverpool. The key places here are as follows:

Liverpool’s culture is on its best display in the central parts of the city, which was by the way declared the European Capital of Culture for 2008. Mathew Street Music Festival is one of the most famous local annual events. National Museums Liverpool, World Museum Liverpool, William Brown Library and Museum and Walker Art Gallery and the  Merseyside Maritime Museum, among others are great museums that you should definitely pay a visit to.