Chinese companies have been known to copy, clone, mimic, and recreate (whichever term you prefer) a vast variety of products from pens to cars and all in between. However, China has taken it a step further in the last two decades and has replicated a large number of architectural landmarks from across the world. Chinese architects have even copied entire sections of famous cities. 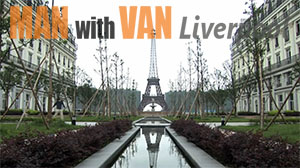 Little Paris is one of the best examples – the full scale copy of the Eiffel Tower is the focal point of the ‘city’ naturally. Little Paris is situated near Shanghai China, its Chinese name is Tianducheng.

The Chinese made a nine hundred and forty million dollar replica of the UNESCO designated Upper Hallstatt village in Austria. The project was commissioned and funded by a Chinese mining company called MinMetals Corporation.

If you fancy a bit of the Big Apple, but in China, then the Tianjin copy of Manhattan is the place you need. The Chinese take on Manhattan occupies the site of a former fifteenth century fishing village which was demolished to give way for the Hudson River and all the rest. The project is due for completion in twenty nineteen.

Le Corbusier’s Ronchamp Chapel is another piece of Chinese copy architecture. The Chinese copy version was built in nineteen ninety four, but the site was eventually demolished in the year two thousand thanks to efforts of Fondation de Corbusier.

What happens when you cross The White House and the Capitol Building in Washington? The Shanghai Minhang People’s Court, of course. The building’s unmistakable architectural features closely resemble those of the US landmarks in Washington.

How about Window of the World Theme Park in Shenzhen? The venue houses copies of over one hundred iconic buildings and landmarks from across the world. There are even 1:3 scaled models of Taj Mahal and Christ The Saviour Statue from Rio De Janeiro.

The focal point of copycat architecture in China must be Huaxi – the village of knockoffs. There one can see proper copies of the Sydney Opera House, the Great Wall of China, also a copy of the entire Tiananmen Square, Arc de Triomphe, as well as many other world class tourist destinations. A local joke is that residents work seven days a week and don’t really have time to travel so they spent two million dollars on copies of destinations they wish to visit.

There are other examples of copied famous architecture from around the world. The Eiffel Tower for instance has been reproduced in many countries around the world, some copies are even made for residential purposes – imagine the look on the man and van removal people when you tell them you are moving into the Eiffel Tower. Buying an entire copy of the Eiffel Tower in China is also an option as many of these landmark copies are for sale, just tell the man and van removal people you require international relocation to China. However, some of these copied sites are deserted and called China’s new-abandoned cities.