There are numerous war memorials throughout England that honour the sacrifices made during various military conflicts. Here are some of the country’s most prolific commemorative monuments.

Animals in War Memorial – Numerous animals served in the military during World War I and lost their lives. According to historical records a total of eight million horses, donkeys and mules died during the war. However these weren’t the only animals used by the army, as dogs were used to search for wounded soldiers and mines, and to deliver medical supplies, while pigeons were used to carry important messages between troops in different parts of the continent.  During the 1990s, the British government decided to erect a monument that would commemorate these animals. The memorial was unveiled in 2004 by Princess Anne, the Princess Royal and is located on Park Lane in London. 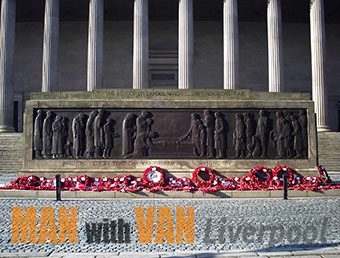 Liverpool Cenotaph – Located on St. George’s Plateau, the Liverpool Cenotaph is one of the city’s most prominent and visited places of interest. The famed St. George’s Hall lies in close proximity to the structure. The cenotaph was built to honour the soldiers who had lost their lives during the events of World War I. The dates of the Second World War were added during the late 1940s. The monument comprises of a rectangular stone block that is elevated on a platform and is ornate with bronze, low-relief sculptures that depict marching troops and mourners. It was designed by Lionel Budden while the sculptures were carved by the renowned Liverpool-born English artist Herbert Tyson Smith. The Liverpool Cenotaph was recognised as a Grade I building on the 3rd of November, 2013. So make sure that you visit it once your relocation is over via Liverpool man and van services. Don’t be hesitant into using professional assistance for your removal as nowadays Liverpool man and van contractors work with highly affordable prices.

Whitehall Cenotaph – This national War Memorial is situated in the central areas of the English capital. It was designed by Sir Edwin Lutyens and was originally made from plaster and wood. It was built as a temporary piece that would be used for the Peace Parade and Peace Day Celebration of 1919. During the parade thousands of marching troops, stop at the cenotaph and saluted it while spectators placed flowers at its base. This unscripted deed from the soldiers and the fact that it had become a focal point for grieving convinced the London authorities that the monument should be converted into a permanent structure. The new memorial was once again designed by Lutyens and was finished for the 1920, Peace Parade. Today the cenotaph is the site were the Ceremony of Remembrance is held during the month on November.